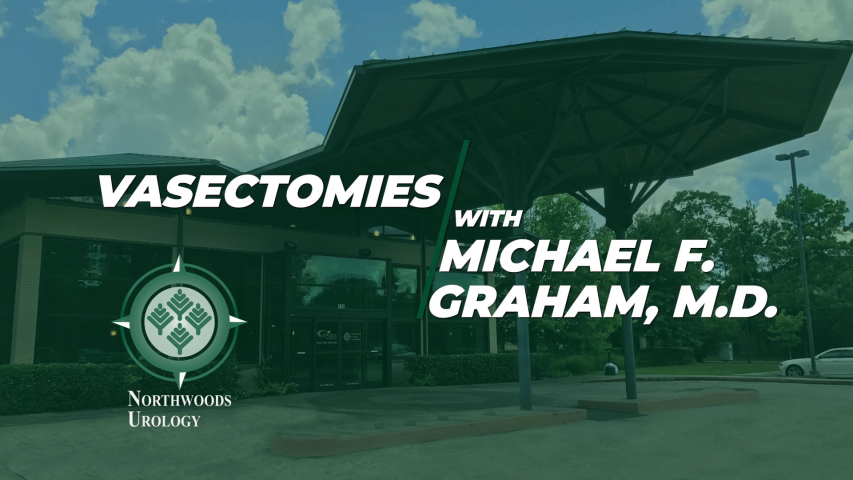 Hi, I’m Dr. Michael Graham. I’m one of the urologists here at Northwoods Urology of Texas. And I’m here today to speak about vasectomy. vasectomy is one of the safest and most effective methods of male contraception in practice today. The ideal man for a vasectomy is a man who’s decided that he’s no longer interested in having children now or in the future.

We look at this as a permanent form of birth control. There are alternative methods of contraception available like condoms, birth control pills, that sort of thing. Those forms of contraception are what we’d recommend if there’s some doubt whether a man wants to have children in the future or not. But once that man has concluded that there are no more desired children in the future, a vasectomy can be an ideal choice.

The overwhelming majority of our patients choose to have the vasectomy done here in the office. That’s done under a local anesthetic. It can be done very comfortably. So a local injection similar to what your dentist might use when doing dental work. The procedure itself from the time I start as a urologist takes about 10 minutes to do. There is a small injection to numb up the skin and numb up each vas deferens. We use the no-scalpel technique which tends to limit inflammation and limit bleeding associated with the procedure. So there are no sutures needed, no stitches needed.

The opening that we make in the scrotum is so small that it seals up without the need for sutures. And there’s no, don’t really need to tape on a bandage or anything just a little antibiotic ointment and a little piece of gauze is typical all the dressing a patient would require. Most patients don’t require any type of narcotic pain medication typically just Tylenol or ibuprofen or Aleve or typically sufficient to relieve the discomfort afterward.

We advise men to avoid heavy lifting or strenuous activity for about three days after the vasectomy and to avoid sexual activity for about seven days after the procedure. Part of my job as a urologist during the counseling session is to make sure that the patient is a good candidate for a vasectomy. And again, we consider the ideal candidates to be men who are confident that they’re done having more children. But life sometimes has surprises and some men, a small fraction of men will change their mind and desire vasectomy reversal.

So if you’re a man considering a vasectomy please call our office to set up a counseling session or check our website for more information.

If you have a urologic need, we are here to help. Call (281) 404‑3000 about scheduling a TeleVisit, a one-on-one teleconference with a urology provider who can determine if an office visit is necessary. For everyone's health safety, if you have COVID-19 related symptoms--including fever, shortness of breath, cough--and want to convert your upcoming appointment to a TeleVisit, call the office.