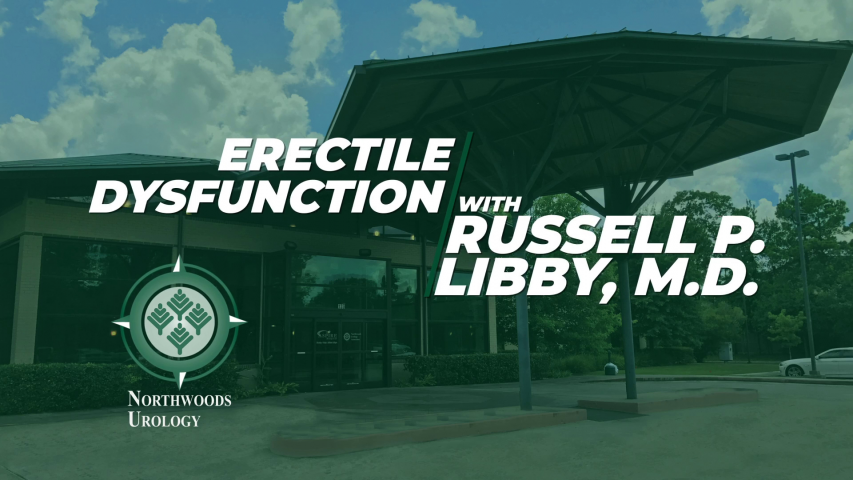 I’m Dr. Russell Libby with Northwoods Urology of Texas, and today we’re gonna be talking about male erectile dysfunction. Men often come to see me in the urology clinic with complaints of not being able to get an erection. Well, it doesn’t matter what age you are, it’s still important. And depending on your set of life circumstances, I want you to come in and talk to me about what’s real, and what needs to be addressed.

I often see patients who say that they’re in their fifties and sixties and they’ve had their fun, but I can tell you, depending on your situation, I think we can help. And what we need to do is we need to sit down, and we need to talk about what’s going on in your life, and what kind of medical problems you have and figure out why you’re suddenly having erectile dysfunction.

Well, there are medications that we can give, either in the short or the long-term, and we commonly know these as Viagra, but there’s many different types of Viagra, or what we call PDE5 inhibitors, there’s Cialis, and other medications that we can use, that can be taken differently, that have different side effect profiles. Although one of these medications isn’t, and has never been shown to be more effective than the other, men often say that they typically gravitate towards one over another for one reason or another.

So what we need to figure out is if that will work for you first, which is an oral therapy for erectile dysfunction. Now, if the oral therapies have been something that you’ve tried, and haven’t been successful, then there are other medications or treatment options that we should explore. I like to go from least invasive to most invasive, in anything that I do regarding patient care. And so I think medications are a good first place to start.

After that there’s urethral suppositories, which are basically a medication you can put in the tip of the urethra and massage into the penis, which could potentially give you an erection. The next form of therapy is a injectable medication into the penis. Now men come in to see me and they say, I don’t wanna inject anything into my penis. And I look at them and I tell you that’s a normal sentence. But I can also tell you, that after I talk to you and explain the process, people feel much more comfortable. The truth is that, the injection is done with a very, very small needle, that typically doesn’t cause much pain at all, and men are very satisfied with injection therapy for their erectile dysfunction.

If you think that you may wanna try this, I would suggest that you first try this in the urology clinic, to make sure that you’re an acceptable candidate, for this therapy. If we find that medications and injections don’t work for your erectile dysfunction, there is always hope at the end of the tunnel. I will, If you come in to see me, be able to get you an erection.

It may require surgery, but that is the last resort. When you come in to see me, if medications didn’t work and injections didn’t work or something you don’t wanna try, or you tried a vacuum pump and that didn’t work, the next thing that we would talk about would be a inflatable penile prosthesis, or a malleable prosthesis. Basically these are devices that can be surgically implanted into the penis, that allow for the penis to become erect, for when it’s time for intercourse. This is a very good choice and has a very high patient satisfaction rate.

The things that you have to understand before you put a prosthetic in, is that anytime you put a prosthesis in, although it works well, it can have risk for failure, or infection, or need to be modified later. That’s why we like to choose the non-invasive options first. However, most men with who have prosthesis, are very, very satisfied with them, and often go on to recommend it to some of their friends, and I’ve seen that.

So I think that what we need to do, is we need to just be more open about talking about erectile dysfunction in general, and it’s never too late to get treatment, and I’d be happy to talk. So if you think that you may be suffering from erectile dysfunction, I’m Russell Libby with Northwoods Urology of Texas, you can visit us online, or make an appointment by calling us here in the office, and I’d be happy to help you.