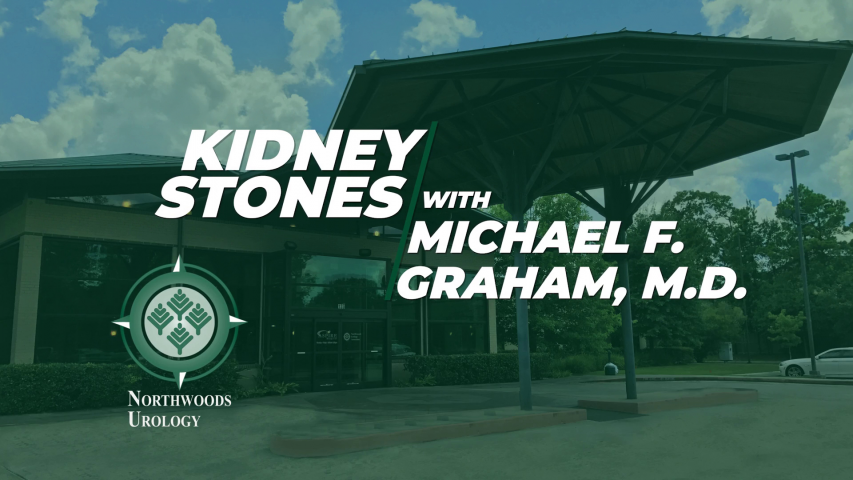 Some of the myths that we have in urology regarding kidney stones are that apple cider vinegar or some other over-the-counter supplement will dissolve a stone that’s already formed. Stones, the overwhelming majority of stones, once they formed, they either have to pass or they have to be removed in one form or another. Most patients form stones from calcium stones. And they will not dissolve with any type of supplement that you can take over the counter.

Another question that we get is for patients who have well water. They’ll be concerned that something in the well water is contributing to the kidney stones. Really, there’s no evidence that whether you get your water from a municipal water supply or a well or a bottle that that changes your risk of kidney stones at all. Well, kidney stone disease can be a very extensive topic to cover. We’ll try to cover the basics of it today.

As far as what stones are composed of, the majority of patients form stones that are made of either calcium oxalate, calcium phosphate, uric acid, or a substance called struvite. Struvite is associated with bladder infections or kidney infections. Calcium stones are more commonly associated with a genetic predisposition to the stone or being dehydrated on a chronic basis or sometimes some aspects of the diet that could increase that risk as well. Uric acid is the substance that causes joint pain and gout, but even patients who don’t have gout can have problems with that same substance crystallizing the urine, which may block the kidneys and cause excruciating pain.

As I mentioned before, over-the-counter supplements or even pharmaceutical supplements, typically don’t work to dissolve stones. Our first treatment option to manage stones is to actually have them pass. Either time and hydration or drugs like tamsulosin can help stones pass. Oftentimes using narcotic or non-narcotic pain medication can help manage the pain until the stones pass. But the majority of stones that are less than about four millimeters in diameter will pass without the need to go to the operating room. For stones that don’t pass or for patients who are tolerating their stones poorly or stones that are just very large, then we typically treat patients with either shockwave lithotripsy or ureteroscopy. Shockwave lithotripsy is the less invasive of those two options. With shockwave lithotripsy, we send shockwave energy, kind of a supersonic sound wave through the skin, focused on the stone, which breaks the stone up into smaller pieces.

And those smaller pieces pass more readily and more quickly than the bigger stone fragments would. Alternatively, ureteroscopy, where we pass a small scope through the opening of the bladder and up to the level of the stone and then use a laser to break up the stone and then pull those stone fragments out can also be very effective. Neither of those techniques involves any type of cutting on the patient. We either just pass energy through the skin or pass scopes through openings that already exist.

Our last common option for stones is what’s called percutaneous nephrolithotripsy, where we insert a small tube through the side directly over the kidney and we’re able to pass some larger scopes directly into the kidney to break up the stone, as well as evacuate or vacuum out those stone fragments. For patients who’ve had their knees scoped, it’s a technique that’s not identical to, but analogous to knee scoping. It just we use the instruments up at the level of the kidney, and we’re able to address very large stones that way. But the opening that’s placed at the time of that type of surgery is only about the width of your little finger.

So if you’re a patient who has symptoms of stone disease and you’re suspicious that you may be passing a urinary stone, please call our office to set up an appointment or check our website for more information on kidney stones.